On 7 April 2021, IRC Global Executive Search Partners convened a virtual roundtable featuring HR and D&I leaders representing top organizations across APAC and EMEA and moderated by Niamh O'Driscoll of IRC Ireland. The discussion centered on the leadership response to the SARS-CoV-2 threat that emerged in 2020, building a diverse and inclusive talent pipeline and the importance of D&I within a progressive and proactive environment, social and governance (ESG) framework. 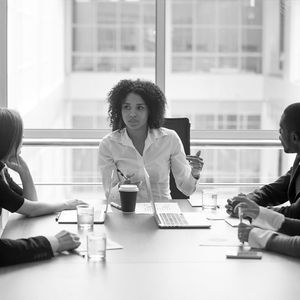 Companies that have adopted an ESG framework have generated better returns on several global indices, reason enough to embrace the more demanding standards, according to Nirmal Kumar, Global Head of HR, Customers, Products and Strategy at London-based HSBC. “We've made significant commitments on ESG, and I see so many progressive companies making the commitment, but key to that is inclusion.”

An inclusive organization isn’t just one that seeks an equitable gender balance and fosters diversity, it’s also one that encourages its team members to speak up, to challenge, question, point out excesses and wrongdoings, Kumar noted. “There are so many topics under inclusion, and fundamentally, it’s key to ensuring an equal and fair society for all.”

From Crisis to Accelerated Innovation

HSBC was heavily impacted by the crisis that paralyzed the world in 2020, Kumar said, with a significant reduction in its retail business, a drop in credit card spending and a significant decline in unsecured lending. The impact has been mixed, however; the bank’s wealth business did well as stock markets plunged and then rebounded to historic highs.

The mixed impact created significant challenges around workforce planning, as resources had to be reallocated to contend with shifting demand, he said. The other significant impact was on the digitalization of its business, Kumar noted. “What would have ideally happened over a three- or four-year period got accelerated into a six-month-to-one-year period.”

For Virginia-based Mars, which has more than 130,000 employees across 80 countries, reconciling the needs of employees and customers, and contending with health and safety concerns for those workers who needed to be present while transitioning office-based associates to work remotely, was the first call of duty, said Global Inclusion & Diversity Officer Ibtehal Fathy.

“We had associates who joined the business over the past year who were on-boarded but have not been able to meet their peers, line managers and teams face-to-face,” she said, adding, “We introduced programs and support systems to enhance and maintain the human connection and relationships to ensure an ongoing sense of belonging and team collaboration.” Stockholm-based telecommunications company Ericsson faced similar challenges over the past year to accelerate the digitalization of its operations while meeting the needs of its customers, but overall, the business has performed well, said Vice President and Head of Commercial Management, Ericsson Southeast Asia, Oceania and India Linda Lindberg.

“We really focused a lot of our efforts to ensure we could support our customers and partners and employees through these changes,” she said. “Thereafter, it was trying to figure out how we really make this more sustainable, because we soon understood this was going to continue for some time.”

The disruptions of the past year were widely characterized as unprecedented, but many countries have endured similar economic paralysis on account of war and civil unrest over the years. The uprising in Egypt a decade ago, for example, prompted many organizations in the country to devise contingency plans, according to Ghada Howaidy, Associate Dean, Executive Education and External Relations at the American University in Cairo.

“We had a reference point in our institution for how to act, and this helped a lot. We had the digital infrastructure and we had the agility and the mechanisms to retrain and change course,” she said. The school of business trained its instructors and moved 2,000 participants online within two weeks, Howaidy said.

“We got proof that participants are comfortable with doing online executive education, but also, we understood that our product will change into being more modular and personalized; people are going to be more in control,” Howaidy said. “What was going to happen over a few years happened in six months.”

Leadership competencies that have stood business managers in good stead historically have proven their worth over the past year, said Kumar. These include a digital-first mindset, a quick pace and an embrace of differences of all sorts, which results in strong engagement, he said. Empathy is also critical, especially in troubled times, he added. “Leaders who put the success of others and customers first, and then take decisions with that framework in mind, have had the best impact.”

Certain qualities and skills have definitely stood out, Lindberg agreed, including digital fluency, adaptability and humanness, in addition to self-leadership. “We need leaders who can adapt well to significant changes and stay cool, understand how to zoom out, navigate, understand what's happening, and then quickly prioritize and accelerate the activities that need to happen. The ability to identify problems that are not creating noise is also an important skill,” Lindberg said.

Ericsson fast-tracked its leadership development efforts to build coaching skills among its leaders to contend with increased stress. “We had already been investing a lot to train our leaders in coaching, and that became something we further accelerated to equip our leaders to manage this situation, especially self-leadership. Self-leadership is critical to keep team members motivated, on the one hand, and rein in those who become consumed by work on the other,” she added. “When a crisis hits, the inner game really comes out,” said Anish Singh, Head of Human Resources, Australia and New Zealand at Unilever. Leaders who pay attention to the inner game drive positive business outcomes by being purposeful, service-oriented, and by listening, Singh said.

Leaders should also be mindful about how individuals are recognized, both internally and externally, Lindberg said. There are too few role models representing companies in public forums who reflect the diversity and inclusiveness these same companies espouse, she noted. “I’m a big believer in ensuring you present these role models, this inspiration, to the greater communities.”

Despite the growing momentum around diversity and inclusion, many organizations are lagging. It starts with setting clear goals and ambitions, said Lindberg. Ericsson has derived great benefit from establishing a talent board to review senior hires, she noted. This peer review helps articulate the capabilities and gaps each candidate has, and serves to filter out bias, she said.

“Meritocracy doesn't conflict with diversity,” Fathy pointed out. There's plenty of capable talent from diverse backgrounds, she said. “The key questions are, are they being seen, and are there appropriate measures taken to remove bias that could limit their ability to join, grow and stay?”

The most important thing is to make a public commitment to inclusion and gender diversity, which should then be supplemented by a series of operational parameters, said Kumar. “That sets the tone from the top.” Such pronouncements influence managers when recruiting and reviewing promotions, because they know inclusion and diversity performance is measured and managed consciously by senior management, he said. HSBC also has a talent board and has been addressing unconscious bias with targeted programs and tactical interventions, like gender-neutral job descriptions, Kumar said.

It isn’t enough to use gender-neutral job descriptions, however, Howaidy said. A job advertisement for a CEO with international experience disadvantages women, given women have historically been less able to relocate their families with a spouse in tow, she explained. Organizations can think more deeply about competencies they require and consider other proxy channels to obtain them, she said. “I'm not for gender neutrality, because I think we hide our biases behind that. I am for gender acknowledgement,” Howaidy said.

Men will inevitably feel threatened by greater gender equality, Howaidy said, because it’s a zero sum game at the top, and they will lose privilege and entitlement as more women occupy senior roles. The whole point of gender diversity is improved corporate governance and a change in the organizational culture, however, which should be championed by enlightened men in every organization, she said.

“I don't think you should have to look at it from the perspective of feeling threatened, but more as an opportunity to enhance the standard,” said Kumar. “It actually does benefit and enhance performance, not only corporate social governance, but the actual commercial performance.”

Unilever brands that have a clearly defined purpose and a core linkage to sustainability are enjoying 33% higher growth than brands that don’t, according to internal data, Singh noted. “Sustainability is not only about the environment, it’s also about employability.”

“It factors directly into the economics of mutuality,” added Fathy. “When you're socially conscious, when you're creating a positive impact beyond your four walls, there is a societal as well as a business value to that,” she said.

When you say HR Guru in the Philippines, one name immediately comes to mind: Nic Lim.